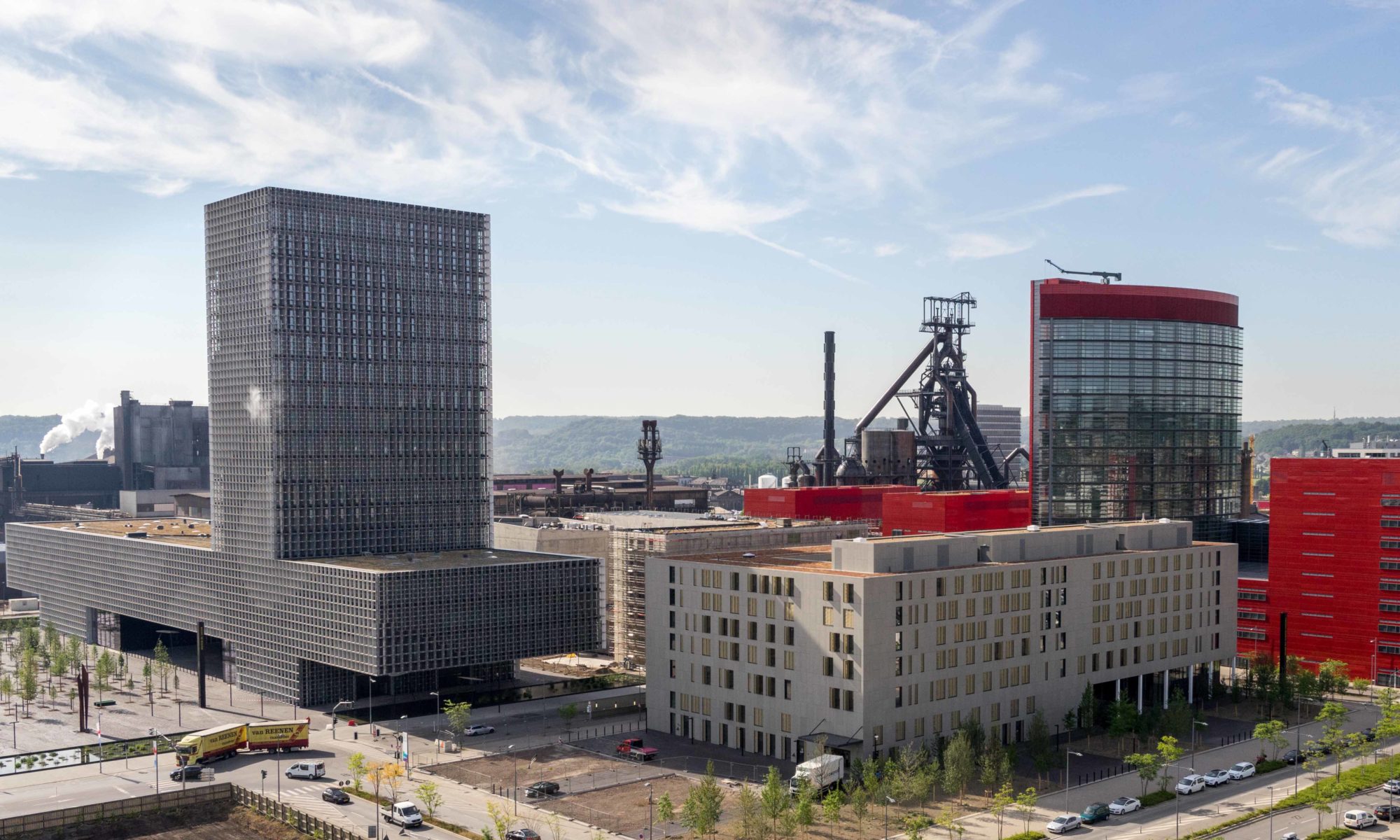 The south of the country of Luxembourg has a strong industrial heritage. During the 19th and early 20th centuries, the area was home to a large steel manufacturing sector. Due to direct access to iron ore, the steel industry predominantly settled nearby. Steel mills were built next to existing settlements, attracting workers from Luxembourg and abroad, gradually transforming villages into cities.

The steel crisis in the 1970’s prompted an economic re-orientation. The decline of the steel industry and its production sites led to a period of difficult economic transition. Nevertheless, the vacant steel production sites in direct proximity to city centres would prove valuable for the future.

To support alternative economic sectors and to address high demand for offices and housing, these brownfield sites are steadily being converted into urban districts. The ‘Belval’ reconversion project is the first development of its kind in Luxembourg, converting the former steel production site into a new urban district.

The ‘Belval’ site is shared between the city of ‘Esch-sur-Alzette’ and the municipality of ‘Sanem’ in the South of the country. In 1997 steel production finished, leaving a 120 hectare idle industrial site next to the two centres that risked being left vacant. Developing the site would provide potential for decentralisation, an objective mentioned in the national planning strategies.

This triggered the development of ‘Belval’ from a brownfield site into a new urban district. The site should provide office space and housing attracting businesses, inhabitants and employees, supporting and strengthening the economy of the region. Developing ‘Belval’ should also support the government’s decentralisation policies, developing a second growth pole in addition to Luxembourg City, reinforcing a more balanced territorial development.

Initial plans for developing the steel mill into a new urban district were made a year prior to its closure. Accommodating businesses, new inhabitants, a university and a concert hall, the area was planned as an urban and independent district of the municipality of Sanem and the city of Esch-sur-Alzette. The masterplan puts special emphasis on the creation of knowledge economy businesses, encouraging specialisation in knowledge-intensive sectors. Sustaining and valorising the area’s architectural heritage should create a special identity for the district and a reminder of the industrial past.

First efforts to develop the area into a new urban district started in 1996. The masterplan was adopted in 2002. Development is still ongoing, with about 50% of the buildings completed by 2019. Development should be finalised by 2028.

Development was entrusted to two intermediaries, that were specifically founded for this purpose. The first and primary intermediary, AGORA, is a public-private organisation encompassing the steel company (the former landowner) and the state. The organisation is in charge of developing and commercialising the new district and benefits are shared equally between the two members. The second intermediary is the ‘Fonds Belval’ (Belval Fund), implementing the public investment programme. So, the public institution is in charge of building, approving and managing the buildings as well as public infrastructure such as the university complex and the museum.

Many public bodies were involved in the process with ministries and municipalities in supervisory and consultancy boards, the national railway for traffic planning and the municipalities having their final say on development through land-use plans and building permits. Private investors are also implementing non-public buildings in ‘Belval’.

There are several important implementation steps for the development. A key one was the foundation of an ‘ERSID’ (grouping of economic interest) in 1996 as an intermediate institution. It launched a pre-study, investigating the potential to convert the brownfield site into a university pole. Steel production in ‘Belval’ was halted in 1997 and the land was transferred for a symbolic price of EUR 1 from the steel company to the state.

Another key step was the foundation in 2000 of AGORA to implement the project. Developing public installations, as detailed in the masterplan adopted in 2002 was ‘Fonds Belval’, founded the same year.

Construction started in 2004 and the first buildings were completed soon after (e.g. a concert hall ‘Rockhal’ in 2005, first office buildings in 2006 and a shopping mall in 2008). ‘Belval’ welcomed the first residents in 2009. The university and research institutes opened their doors in 2015. Today, the development of ‘Belval’ is not yet finalised with less than half of the planned buildings still to be realised.

As ‘Belval’ is still under construction and far from being finalised, it is not possible to assess the resources required for the development. ‘Fonds Belval’ indicated in its annual balance sheet of 2017 a budget of EUR 614 million for construction and related services.

Today, ‘Belval’ is an urban district, hosting many important national functions. The university, research institutions (e.g. Luxembourg Institute of Socio-Economic Research), banks and large service providers are all in the new district. A total of 180 business institutions, retailers and restaurants have opened providing labour for 5,000 employees. The site also hosts amenities such as a concert hall, a shopping centre and a museum, as well as 2,400 permanent residents.

‘Belval’ is the economic motor of the south, highlighting the economic rationale for developing the district. With more employees and residents to be welcomed in future, its economic role is expected to increase.

The area features modern architecture, integrating innovative building forms and techniques. Meanwhile, the industrial heritage was preserved in the form of two high furnaces and their related infrastructure that function today as a museum. Despite the high density of offices and housing, ‘Belval’ has large public spaces, squares and pedestrian zones.

The specifics of brownfield developments mean many non-standard solutions have been required. ‘How to deal with soil contamination?’, ‘How to integrate industrial heritage into the urban development concept?’, ‘How to build an urban area from scratch and how to make the district function with far more employees than inhabitants?’ and ‘How to make the retail sector function with a small number of potential customers?’ are just some questions that had to be addressed during development.

Maybe because of the uncertainties and the steep learning curve for planners and decision-makers, realisation of ‘Belval’ continues. If everything goes as planned, the district will be finalised after more than three decades, having stretched across the entire careers of some decision makers and planners.

The planning process is very often taken as a prime example for a top-down process, overruling local citizens and decision-makers. This perception is rooted in the limited involvement of potential citizens and local authorities in the conception and realisation of the site. The masterplan also featured little flexibility to address problems and issues arising during its realisation.

Despite criticism in recent years, views on ‘Belval’ have started to change. The relevance of ‘Belval’ for economic development of the south, the large number of businesses and the urban design of the existing district are positive. Slowly but steadily, ‘Belval’ fulfils the purpose for which it was designed, as the new centre of the knowledge economy in Luxembourg.

As a result, the name ‘Belval’ is known by individuals in and outside of Luxembourg. The sheer size, the many issues planners had to tackle and the fact that ‘Belval’ is the first reconversion project in Luxembourg have increased the projects’ visibility. The area is also a testbed for future developments of brownfield sites in the south of the country.