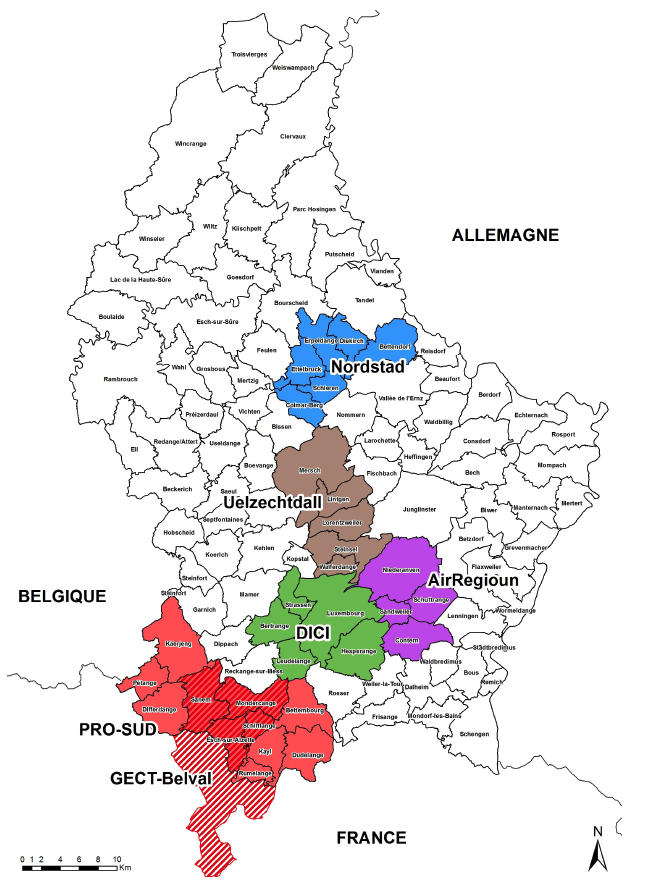 Conventions are contractual agreements that foster cooperation between municipalities and the State in Luxembourg. Conventions can cover a multitude of topics in the field of spatial planning and urban development.

In Luxemburg, the national level sets the general political objectives and orientations of spatial planning and development. To a large extent, the competence for urban planning and development lies with the municipalities. An intermediate level between the state and the municipalities is missing; there is no regional level requiring neighbouring municipalities to coordinate their spatial planning procedures or future development options. Yet cooperation and coordination among all levels of government (vertical dimension) and with relevant actors at the same level (horizontal level) is necessary to achieve the objectives of a sustainable spatial development.

Conventions promote inter-municipal and multilevel cooperation to foster sustainable regional development, promote integrated planning and address specific development issues. In this context, conventions facilitate the vertical cooperation between the State and municipalities with the aim of implementing the objectives established in territorial strategies, such as the Master Programme for Spatial Planning (PDAT), the Integrated Transport and Spatial Planning Concept (IVL) and the Global Strategy for Sustainable Mobility (MoDu 2.0).

The first convention of territorial cooperation was created on an ad-hoc basis in 2005. Since then, five more conventions have been signed. The process was formalised in 2013 with the Law of 30 July 2013 on Spatial Planning, which defined the procedure for concluding conventions with territorially contiguous municipalities. In the new Law of 17 April 2018 on Spatial Planning, conventions are defined as a proprietary instrument for the implementation of the objectives of spatial planning.

Municipalities and national authorities (in particular the Department of Spatial Planning and Development in the Ministry of Energy and Spatial Planning). Membership is voluntary and there are no explicit statistical, geographical or morphological criteria for joining. With the new Law of 17 April 2018 on Spatial Planning, municipalities do not need to be territorially contiguous anymore. The membership of a municipality is solely based on functional criteria: all municipalities in a convention area have a shared understanding of common challenges and opportunities.

A convention represents a contractual agreement between municipalities and the State. In accordance with the Law of 17 April 2018 on Spatial Planning, the initiative to establish a convention can come from either the interested municipalities or the Minister responsible for Spatial Planning. Following the approval by the Council of Government, the Minister can sign a convention with these municipalities. The actors draft the text of the convention in which the mission and objectives, the joint projects, the organisational structure, the procedural setup, and the budgetary provisions are defined. A convention area is managed by a so-called ‘Political Committee’ that is composed of two elected representatives per municipality (usually the mayor and an alderman/alderwoman) and the Minister responsible for Spatial Planning. This Political Committee defines the political priorities of the convention and approves the annual work programme. The discussions and decisions at the political level are generally prepared by a ‘Technical Board’ that is composed of the municipal officers responsible for urban planning and policy experts from the Department of Spatial Planning and Development and, depending on the subject, other ministries. The day-to-day business and the follow-up of projects is, in some cases, managed by a Coordination Unit. Convention areas are not recognised as an official territorial unit and there is no formal delegation of competences to the Coordination Units.

Conventions of territorial cooperation establish an organisational structure and a financial framework for the duration of the agreement. The allocated budget may vary depending on the willingness of partners to contribute and on the resources required to resolve a specific issue. The Department of Spatial Planning and Development financially contributes to the budget of each convention area, with the rest of the budget coming from the municipalities.

Conventions are an instrument allowing to bridge decision-making levels. Conventions are often a first step to initiate territorial cooperation to work on an identified issue and lead to more institutionalised forms, such as municipal syndicates. Therefore, as of 2021, there’s only one active convention remaining:

The following conventions have lead to more institutionalised forms of cooperation:

More conventions existed but did not lead to fixed forms of cooperation:

An important incentive for the municipalities to participate is the enhanced cooperation with the State as well as the implementation of joint projects. In terms of regional planning, the municipalities do not delegate planning competences to the Coordination Unit. Nonetheless, there is coordinated planning and development in some fields. This degree of coordination varies from one convention area to another with different coordination mechanisms and procedures. This leads to a differentiated pattern of results. All conventions have non-binding spatial development concepts. The Nordstad convention area, for instance, has a so-called Masterplan.

This form of cooperation fosters communication and builds trust among partners. In most cases, State and municipal actors use conventions to structure coordination mechanisms.

Due to their flexibility, conventions can be used to tackle problems in a unique way. The implication of national authorities helps to ensure funding where the municipal contribution is not sufficient, but the State can also act as a moderator or mediator. The national authorities are actively supporting the establishment of conventions. It is also important to provide the Coordination Unit, charged with the management of day-to-day business, with enough competences to successfully implement and carry out projects. Political willingness and commitment are necessary to sustain the cooperation and to implement projects.