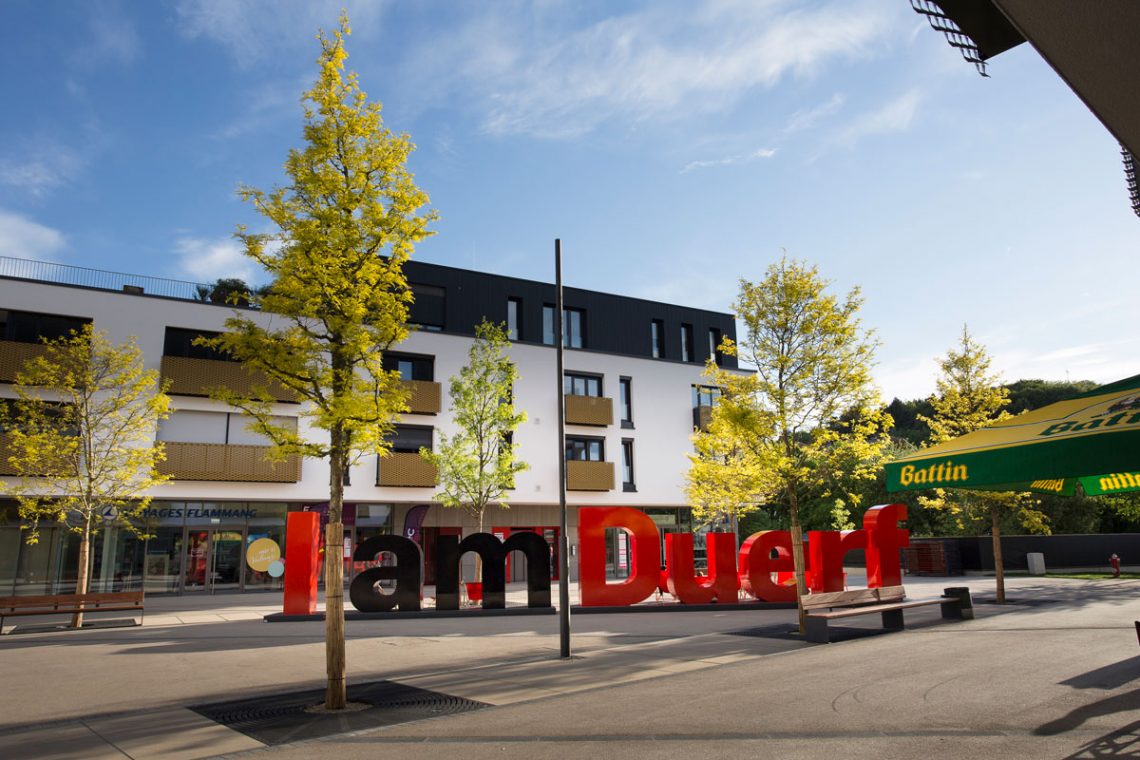 The urban development ‘am Duerf’ was inaugurated in 2017 to revive and increase the
attractiveness of an area next to Dudelange city centre. Development of housing, parking and commercial areas in an area previously used as open-air parking started in 2005. The
municipality of Dudelange has developed an adjacent shared space to create a lively urban area.

‘am Duerf’ and development of the adjacent shared space was planned next to Dudelange city centre. The area was previously used as open-air parking and backyard gardens. The
transformation also helps the city to tackle the increasing housing need.

Tackling the housing shortage is a key priority on the political agenda in Luxembourg. By
constructing more housing units, the shortage of living space can be reduced and prices could drop. Some 13 000 new residents settle each year in Luxembourg overall, exceeding the annual supply of living space.

The project ‘am Duerf’ is also an attempt to counter the movement of urban functions to the periphery. By developing commercial functions, parking and housing in their centres, cities remain attractive. Restoration of public spaces also increases their attractiveness.

The ‘am Duerf’ project was designed to create an attractive new urban centre with parking, commerce and living spaces. Through these functions and the shared space, the amenities are not only for residents but also for inhabitants of surrounding areas.

The key players are the City of Dudelange, with the Ministry of Housing and the Ministry Energy and Spatial Planning in supporting functions. The district was planned by the architect and urbanism bureau STEINMETZDEMEYER from Luxembourg. Private developers implemented the project.

The site of ‘am Duerf’ was owned by a private real estate developer who was also the project developer. Implementation began in 2005, when the idea came up to increase the city centre’s attractiveness by developing the area. An architectural competition was held in 2006. Development of the shared space is in three phases with the last due to be finalised in 2020.

The total amount of urban development is unknown. The resources required to develop the shared space was EUR 3.5 million and the project was co-financed by the ERDF (European Regional Development Fund) through an Integrated Territorial Investment project for nearly EUR 1 million.

The project ‘am Duerf’ resulted in three multi-functional buildings. Public spaces in between are used as crossroads for residents and inhabitants of the surrounding districts. A total of 104 apartments include studios, one to three bedroom-, two-story- and penthouse-apartments. Two apartments are rented as social housing. All units were built using state of the art principles to ensure maximum living quality and sustainability.

The design of ‘am Duerf’ places functionalities within the district on different levels. The
parking floor in the basement provides about 180 parking places very close to the city centre, as well as public and soft modes of transport. These are 70 more places than before, when the area was used as open-air parking. The ground floors provide 4 400 m2 of new commercial surfaces for a supermarket, hairdressers, cafés and more. Floors one to four are dedicated to apartments.

The adjacent shared space integrates this new district into the existing urban pattern. With
fewer barriers separating pedestrians, cyclists and vehicles, it invites interaction across streets, bridging barriers between old structures and new developments. The development has created a new public space in the centre of Dudelange using contemporary architecture and modern urban development planning.

Integrated planning enabled several functions to be combined in the new district including
new residences for new and former inhabitants as well as commercial surfaces. The preceding function of parking could even be extended. The vertical division of functions in the new district into parking, public space/commercial and residential areas help improving urban life and attractiveness. Separating functions on different floors allows their full development without getting in each other’s way. At the same time, the shared space enables a functional mix and social interaction that enlivens the district.

‘am Duerf’ and the shared space in Dudelange is an innovative urban development project. Following state of the art planning principles and modern urban architecture, the project improves the quality of life within and around the new district. This has led to a revival of the city centre, not least because of modern architecture and urban planning. In conclusion, ‘am Duerf’ and the shared space have contributed to changing the image of Dudelange’s city centre.