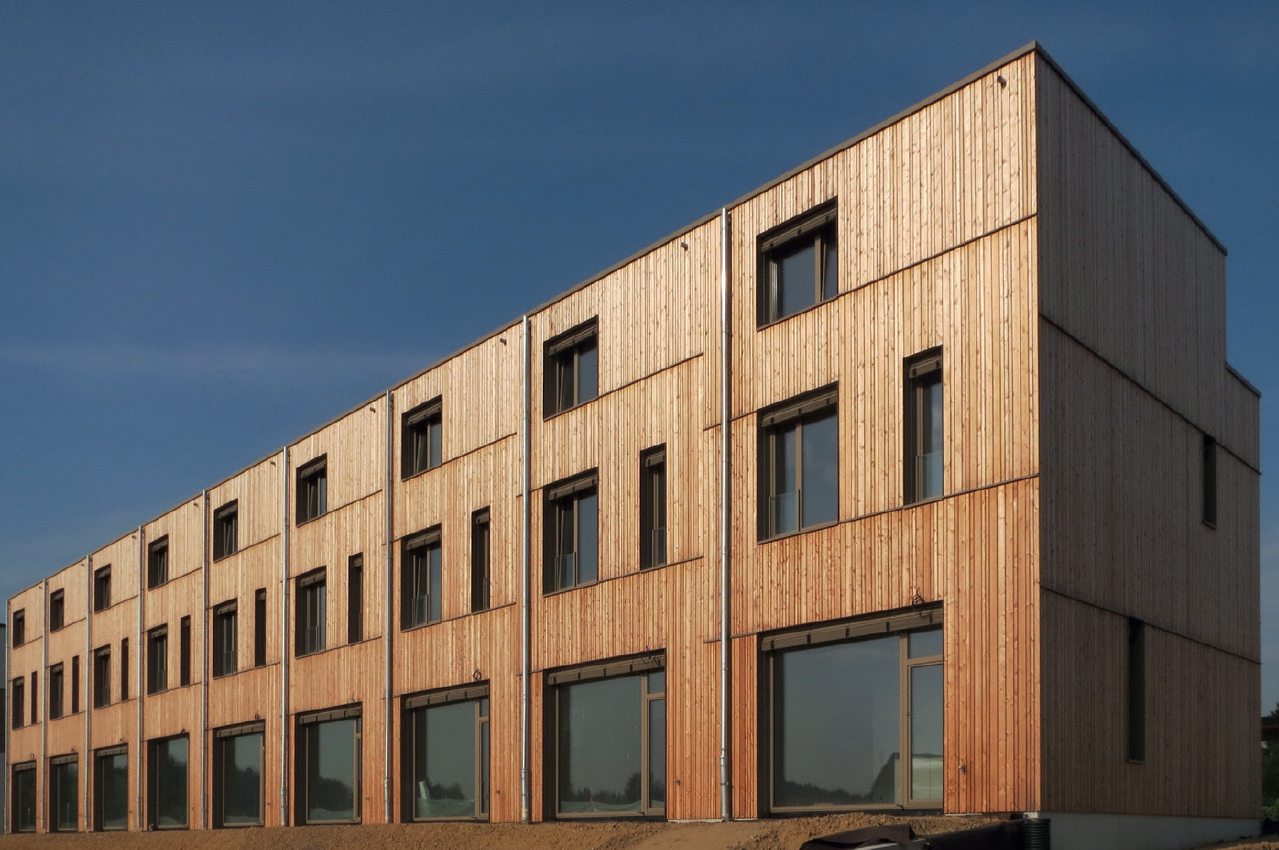 Nonnewisen is a development in Esch-sur-Alzette, the second biggest city of Luxembourg, in the South of the country. The development covers 30 hectares of previously agricultural and horticultural land at the northern outskirts of the municipality.

In Esch-sur-Alzette, prices for housing increased continuously in recent years following the national trend. This has been boosted by the large-scale development of Belval, a former steel-production site close-by, now converted into a new city district. To address the shortage of affordable housing, the municipality of Esch-sur-Alzette in cooperation with Fonds du Logement (the national housing fund) initiated conversion of the site from agricultural land and allotments into a residential area.

Nonnewisen is a new district, integrated into the existing urban fabric. When finalised, it will provide around 900 highly modern housing units, hosting 2 300 to 2 500 inhabitants. Providing a high standard of living in the new district is one of the main objectives. Because the district is part of the existing urban fabric of the city. A high population density for the new district is envisaged. To ensure a high quality of life, emphasis was put on high quality green urban areas as recreational sites between and within buildings.

Additionally, the functional mix between living, working, recreation and consuming provides a high level of service for residents. There will be a new school for 300 to 320 students, a day care centre and a central space with shops. Blending different functions ensures that services will be easily accessible by soft means of transport and the site will also be a centre of attraction for the older, surrounding districts.

The project is being developed since 2003. Development of the district is still ongoing in 2021.

Fonds du Logement is in charge for creating a third and the Municipality of Esch-sur-Alzette is in charge of creating two thirds of the planned accommodation. A large number of planners and architects, private as well as public land land owners are also involved.

In 2003, the first call for proposals for an urban concept was launched, which was awarded to a Dutch firm. A key criterion was that the new area and buildings integrate well with the surrounding urban fabric. Building the new area following the state of the art construction techniques was equally important as environmental protection in the design of the concept.

For the implementation, the terrain was acquired. Around 20 hectares were already owned by the municipality of Esch-sur-Alzette and a small piece of land belonged to the state. The rest is being bought piece-by-piece from the private owners. Even though development has started in some areas, negotiations with owners of other areas are still ongoing. In 2007, construction of the first units started and in 2011 the first part with 17 apartments and 23 single-family houses was inaugurated by Fonds du Logement. In 2012, another 25 single-family houses, 4 double family-houses and 42 student residences were finalised. In 2015, the third phase provided 32 single-family houses, 24 apartments and ~500 m2 of commercial space. In 2017, 8 commercial spaces, 40 more single-family homes and 75 apartments have been completed.

Buyers of subsidised units provided by Fonds du Logement need to be eligible for a housing construction bonus from the state. This is linked to social criteria such as a below-average household income. Under this, 130m2 of subsidised housing costs around EUR 444 000, or some EUR 1 000 per m2 below the average price in Luxembourg in 2016. Such buyers can also access other financial support. Non-subsidised units can be purchased by anyone and 130 m2 of non-subsidised housing costs around EUR 472 000.

Units can only be bought for a term of 99 years. This is through heredity leasehold that costs around EUR 50 per month. People need to live at least 20 years in the units before they can sell their property again and Fonds du Logement has unconditional pre-emption right. Units sold by the municipality (2/3 of the total units built) can be purchased for a lower price. They are sold without heredity leasehold and thus do not include a usage restriction on 99 years.

The development of the new district is organised in stages. The project is not yet completed so total costs are still unknown. As an example, the price for the third phase (32 single-family houses, 24 apartments and ~500 m2 of commercial space) was EUR 17.5 million.

The new district offers residents an attractive environment with a high quality of life. It borders many public green spaces and is close to the city centre of Esch-sur-Alzette. The new district is well connected to surrounding districts as new infrastructure has been created within and towards Nonnewisen and so far the mix of functions promises to be successful.

The development shows how an urban environment can be shaped to provide liveable and affordable housing. All proposals submitted in 2003 under the limited competition procedure were in line with the primary requirements of the public institutions that have triggered the development (the municipality and Fonds du Logement). A cooperative competition process permitted the authorities and tenderers to find common solutions to identified problems. During the planning and implementation of the project, the municipality worked closely together with the Fonds du Logement. The stepwise approach of the developments ensures that the construction of the new district does not overburden the resources at hand.

Nonnewisen is also an innovative design concept. Issues, resulting from high density were structurally addressed in the planning process by providing areas where residents can meet and where they remain alone.

Nonnewisen illustrates how innovative urban forms of housing can look in the future and that high densities are no rejection to a high standard of living. A pre-condition for the development of the site was the ownership structure. Most of the area needed for the development of Nonnewisen is public property and only some areas have to be purchased from private owners. Considering future adaptions of the structure of the district, the recreational green areas are important in order to sustain a quality of life in Nonnewisen.