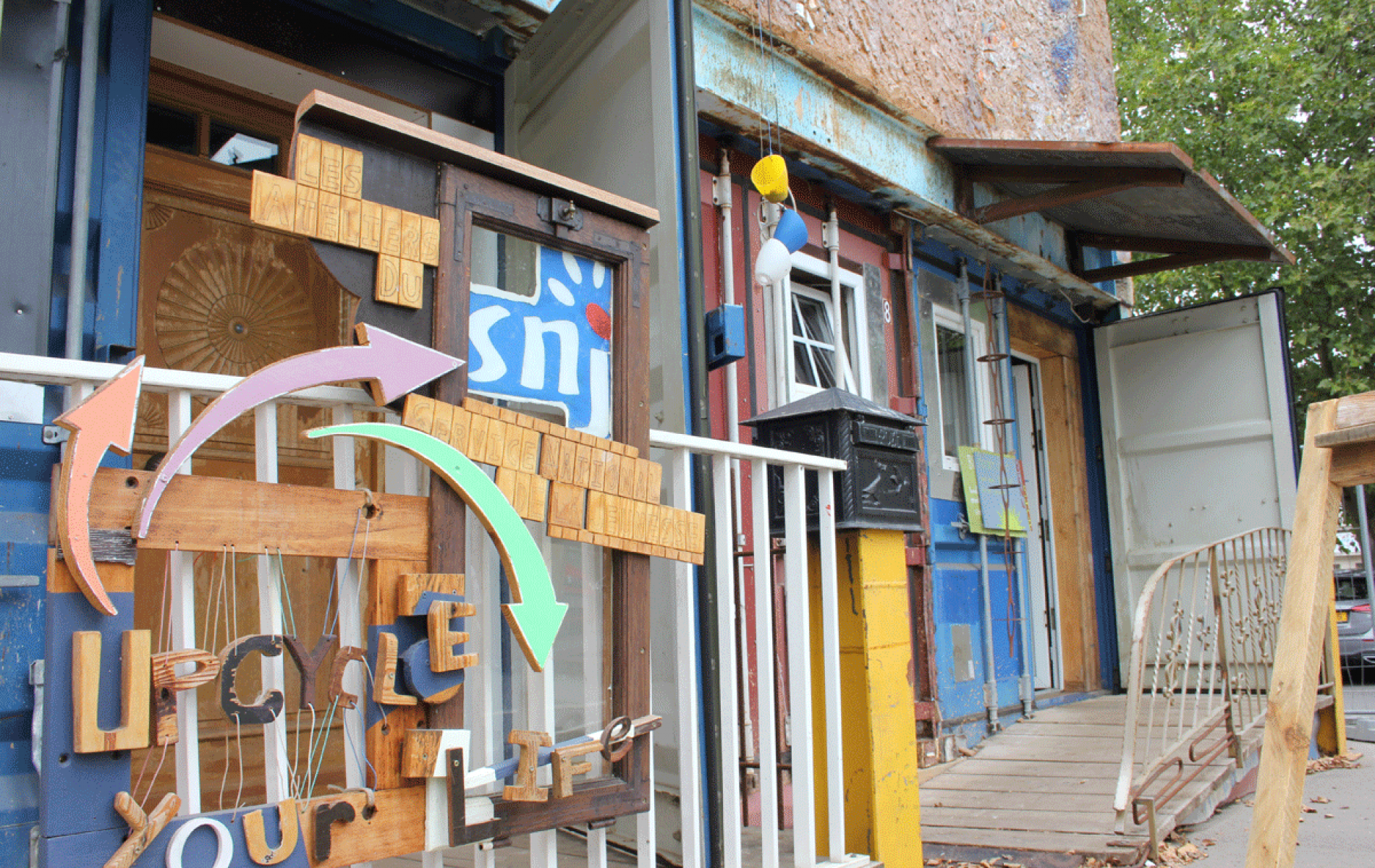 Cities are hot spots of ecological disruption due to excessive consumption of natural resources and high pollution by inhabitants. At the same time, cities are also creative spaces where existing models and rules are challenged, and alternatives are developed and tested.

‘Eco-districts’ and ‘eco-villages’ are new approaches and concepts that are being tested in urban areas. With principles such as ‘zero-waste’ and the circular economy becoming increasingly popular, these initiatives currently experience a renaissance with great interest of the public, decision-makers and urban planners.

At the same time, the demand for products that are produced in an ecologically and socially viable way increases. Alternatives to our established consumption model become more mainstream and promote alternatives to the linear economy of today. Many grassroot initiatives benefit from this recent trend towards a more circular approach in construction and an increasing demand for alternative products. BENU village has committed itself to this idea and in doing so has become the first eco-village of the Greater Region.

BENU village, (neologism for “Be New”) is the name of a grassroot movement in Esch-sur-Alzette. Its objective is to showcase that alternative models to the mainstream way of building and consuming are possible, and so in Luxembourg.

In this regard, the construction of the first eco-village of the Greater Region follows circular economy principles and also the economic activities are committed towards recycling, reusing and upcycling.

The idea to create the BENU village first came up in 2015. A private person had the idea, which soon came to realisation. In 2017, the construction of BENU village started and the first building was finalised at the end of 2019.

To formalise the idea and to increase its visibility towards the public, the city and the state, an association was founded to endorse the implementation of the eco-village: “BENU Village Esch ASBL”. The association is financially supported by the municipality and the state.

During the realisation, other state players became interested in the project. Businesses and state services use the premises of BENU village. For example, the national integration service for young adults organises learning programmes in BENU village.

All building materials used for the construction of BENU village derived from either re-use or recycling. Since the start of the construction in 2017, many volunteers have supported the building of the first house, which was finalised at the end of 2019. In addition to the volunteers, the project was supported by local craftsmen and other businesses that provided knowledge and materials.

In the building process of the village, considerable attention was devoted to the use of recycled materials. During the construction, only the screws were purchased new, the remaining materials, for example the windows, the wood used for framing, the insulation and the exterior shell of the houses, were entirely recycled from waste.

Soon after the first building was realised, shops moved in. The founder and initiator of BENU village opened “BENU Couture”, a tailor shop that produces clothing from used materials and second-hand articles. The premises continue to grow and were opened for other interested professionals.

A Charta, the so-called “BENU Charta” formulates shared values that ought to be respected by all businesses and professionals working in the eco-village, was developed. The Charta puts an emphasis on the ‘zero-waste’ principle, the recycling and upcycling of materials and commits future economic activities in the eco-village to act in an environmentally and socially responsible and transparent way.

BENU village benefits from seed funding of the Ministry of Energy and Spatial Planning and the City of Esch-sur-Alzette, where the initiative is located. Apart from the financial support, the project was realised with the support of volunteers, that helped in the building and organisation of BENU village. As the building materials were mostly recycled, no material costs arised from the implementation of the project.

The numbers speak for the success of the eco-villager: in 2019, a turnover of EUR 210,000 was generated, with 18 persons working for BENU village. About EUR 80,000 were generated from upcycled clothing and accessories. And BENU village will soon grow further. In 2021, when more surfaces of BENU village will become available, they will be rented to professionals pursuing similar ideas. Interested businesses, that act in line with the BENU Charta, can then rent these spaces. This way, BENU village will develop into a coworking space of likeminded professionals and businesses.

As with many grassroot movements, the private commitment to the underlaying idea is important for the success of a project. The idea for BENU village was initiated and implemented by a private person. The continued lobbying and defence of the idea has successfully yielded the interest of elected officially, such as several national ministers and even the Grand Duke of Luxembourg.

In 2021, the project was awarded with the European Climate Star from the Climate Alliance in the category ‘Saving resources’. A short video is available here.

BENU village shows an alternative to our current living and working in an affluent society. Ideas such as ‘zero waste’ can also be successfully implemented with relatively little resources at district level. However, for doing so one needs pioneers and “BENU is a pioneer”, as described by the national Minister for Energy and Spatial Planning, Turmes.

The idea behind BENU is versatile and can be applied for more than just material production. During 2021, a restaurant, following the BENU Charta will open at the premises of BENU village.