What role should spatial planning and urban development play in adapting to climate change? An Interview with Minister Claude Turmes 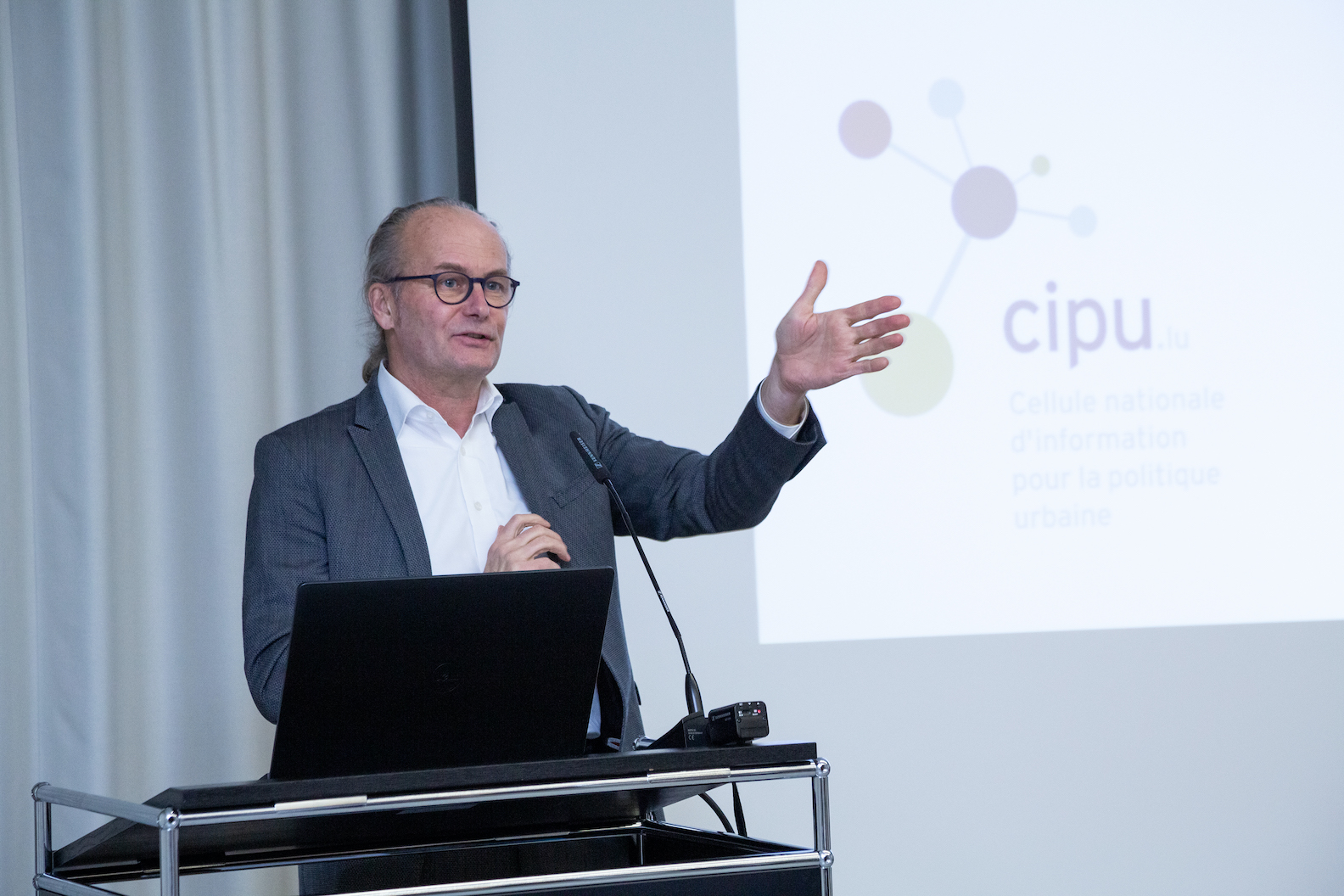 As first contribution to the CIPU Blog, Claude Turmes, Luxembourg Minister for Energy and Spatial Planning has been interviewed on the role of spatial and urban planning on climate change adaptation in Luxembourg.

Minister Turmes: Climate change is a crosscutting issue that concerns almost all sectors and has a strong territorial dimension. Spatial planning can deal with the territorial dimension of climate change by adopting an integrated approach that takes into account the demands of different sector policies, such as environmental protection, mobility and local economic development. As the adaptation to climate change requires compromises, spatial planning can function as a platform for the coordination of and mediation between different sector policies. The National Information Unit for Urban Policy (Cellule nationale d’Information pour la Politique Urbaine, CIPU) and the so-called “convention areas” (referring to conventions of territorial co-operation between the State and municipalities) can function as such a platform.

Cities are at the forefront of the climate crisis. Cities – through the density of the built environment, the high degree of sealed surfaces and the low degree of green areas – are particularly vulnerable to the impacts of climate change (e.g. urban heat island effect, drought and flooding), but they are also major contributors to climate change by producing more than 60% of global greenhouse gas emissions. And while cities are part of the problem, they are also part of the solution. Around the world, cities are leading the action to tackle climate change and drive the innovation to deal with its impacts. This is also the case here in Luxembourg. In the context of the horticultural show LUGA (Luxembourg Urban Garden) in 2023, the City of Luxembourg will have the opportunity to present its innovative urban greening projects to a wider audience.

The development dynamic of cities in Luxembourg will further exacerbate the consequences of climate change, which means that our national approach to urban development itself will have to adapt. Climate change adaptation has to be integrated into the way in which our cities are planned as well as built. Climate-friendly construction, in line with the principles of “eco-urbanism”, will not only increase the resilience of cities, but also the quality of life of citizens.

Interviewer: Where do you see priorities or opportunities to use existing or new spatial planning and urban development instruments for climate change adaptation in Luxembourg?

Minister Turmes: The focus clearly lies on reducing global CO2 emissions. Actually, two thirds of urban emissions come from motorised transport. Above all short distances and energy-efficient construction methods in urban areas can counteract this situation. Generally speaking, it is important to carefully assess the situation in cities and regions in order to find meaningful and appropriate answers to the requirements of climate protection and the necessities of climate adaptation. In Luxembourg, climate change is already clearly seen as an interdisciplinary topic: Not only has the Ministry of Energy and Spatial Planning itself, but also a number of other departments, addressed spatially relevant topics relating to climate protection and adaptation. The Master Programme for Spatial Planning will incorporate climate adaptation guidelines regarding the three agglomeration areas of Luxembourg – the Southern Region, the Nordstad and the so-called “Centre” – with a development horizon of 2035. The goal is the sustainable development of urban regions. This aim also applies to other instruments, such as the Pacte Climat or the Interreg funding programmes. Furthermore, the Ministry of Energy and Spatial Planning is currently working with a planning office specialised in sustainable development on a reference guide concerning “eco-urbanism”, which will present strategies for incorporating climate change adaptation into urban planning.

The spatial planning instruments are particularly effective in the case of new building projects or land provision. However, many climate protection and adaptation measures also take place in existing districts. Regarding existing districts, the different funding programmes are particularly interesting. The CLEVER funding programmes of the Government subsidise up to 50% of the total costs of sustainable projects, such as the installation of solar cells.

If climate adaptation in cities is to become a success, we have to effectively steer sector policies in order to coordinate the implementation of measures. We have undoubtedly reached a point at which specific measures have to be implemented immediately, without falling into a silo mentality. Ultimately, spatial planning plays a central role in this regard, particularly in the framework of a monitoring system for reviewing the effectiveness of our measures and strategies.

Minister Turmes: Innovative energy concepts should definitely play a paramount role in climate-friendly urban development. Climate-friendly energy concepts must become the norm, particularly in the case of new building projects where it is important to back these innovative concepts based on renewable energy from the beginning. We should also consider the possibility to integrate so-called “smart grids”. The advantage of this system is that it can store excess green electricity. This type of energy storage is particularly useful in a climate-friendly city of short distances. Nowadays conventional energy sources should only be regarded as an alternative. This is on what our awareness-raising activities should focus.

The reference guide concerning “eco-urbanism” will also highlight strategies for sustainable urban development with zero emissions. In this process, it is important that strategies for climate change adaptation take into account the spatial and socio-economic context. There are already some municipalities who back energy-efficient pilot projects, such as Remich with the Interreg Greater Region project EnergiewabenGR on so-called “energy combs”. I hope that in the near future more municipalities will dare to tackle pilot projects. The capacity of a region, city or municipality to implement an innovative energy concept does certainly depend on resources and expertise, but primarily on political willingness.

Interviewer: What role does the regional integration of Luxembourg into the supraregional planning context (e.g. the so-called ‘Greater Region’) play for you in terms of adaptation to climate change and climate protection (e.g. the process “Luxembourg in Transition“)?

Minister Turmes: Climate change does not recognise national borders and Luxembourg is not an island. Luxembourg is firmly anchored in the Greater Region as a cross-border polycentric metropolitan region. The functional linkages between Luxembourg and its neighbours in the areas of employment, mobility and housing are so strong that spatial planning in Luxembourg has to take the cross-border dimension of climate change adaptation into account. Both the Spatial Development Concept of the Greater Region (Schéma de développement territorial de la Grande Région) and the international consultation “Luxembourg in Transition” work with this reality and seek, together with partners from the neighbouring countries, solutions at the cross-border level.

We also have to look beyond the Greater Region and work with our partners in North-West Europe. For instance, the Interreg NWE project GROOF – with partners in Belgium, France, Luxembourg and the Netherlands – aims at reducing CO2 emissions in the construction and agriculture sectors by facilitating the emergence of rooftop greenhouses as a tool to recover the heat and CO2 of buildings. The Luxembourgish project partner “IFSB” (Institut de Formation Sectoriel du Bâtiment) is investing in a rooftop greenhouse pilot in Bettembourg. Knowledge transfer beyond the project has been initiated by coaching the housing cooperative “Adhoc habitat participative” in the City of Luxembourg.

Interviewer: What is the role of the CIPU for climate change adaptation in Luxembourg?

Minister Turmes: The National Information Unit for Urban Policy (Cellule nationale d’Information pour la Politique Urbaine, CIPU) stands for a collaborative partnership between the State and cities. The objective is for the State and cities to work together on common problems, such as the adaptation to climate change, and develop practical solutions in the area of urban development. The CIPU thereby functions as a public forum for the discussion of ideas and the exchange of experiences between the State, cities, nongovernmental organisations and professionals.

The CIPU can facilitate the establishment of a high-quality urbanism that respects the principles of zero emission and zero waste in Luxembourg.

The CIPU can also contribute to capacity building in cities by offering learning and training through webinars, providing tailor-made knowledge input for workshops and support its partners in the submission of project proposals in the framework of European programmes.

One of the objectives of the CIPU is to create a two-way connection between the European level on one side and the national as well as municipal level on the other side. This means that, on the one hand, the CIPU presents examples and projects from all over Europe to stimulate the transfer of good practices in Luxembourgish cities. On the other hand, the role of the CIPU is to upload good practice examples from Luxembourgish cities to the policy debate at the European level and promote them in European forums.

Interviewer: Thank you very much Minister Turmes for these answers.

In case of questions or comments, please feel free to contact the editor (sebastian.hans@spatialforesight.eu) of this article.